Note: Each of the nationwide organizers of the #Protest PP effort has written a summary of the national protest effort and their personal experiences on August 22. Below is the account from Mark Harrington of Created Equal. You can also read the accounts from Eric Scheidler of the Pro-Life Action League and Monica Miller of Citizens for a Pro-Life Society. 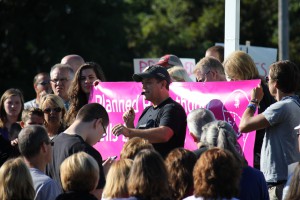 “We were asked to raise our hands if this was the first ever pro-life demonstration we had attended. The number was huge. So these are not just the old die-hards. This is a new wave.” —John Piper, reflecting on #ProtestPP in St. Paul, MN

“Christians have had enough,” I declared to over 700 lining the street, surrounding Planned Parenthood with signs showing abortion victims and decrying the organization’s barbaric trafficking of baby parts. “And they are coming out and making their voices known.”

Though I was speaking in Columbus, Ohio, on that morning people were making their voices heard across the country. For instead of merely planning a protest outside our local Planned Parenthood, I had united with good friends Eric Scheidler of Pro-Life Action League and Monica Miller of Citizens for a Pro-Life Society to plan something bigger. The idea was simple: a nationwide protest of Planned Parenthood.

The response was historic. Not only did more than 60 pro-life organizations agree to co-sponsor #ProtestPP, but the simultaneous protests took place in 356 cities—including 49 states plus Washington, DC. We even had six international sites join. As I write this, we are still waiting for some cities to report their numbers and we’re already over 77,000 participants. 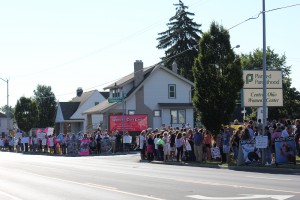 #ProtestPP was the largest protest of Planned Parenthood in history. It was prominent across social media—easily taking the number one trending slots on Facebook and Twitter—and spawned articles and videos in traditional media both local and national, such as TIME Magazine and the Washington Times.

USA Today’s piece on the protest quotes me laying out the vision for the event: “We don’t believe this will be solved in Washington, DC or the state legislatures. This will be solved in local communities when they take ownership over their own communities. That’s why we are trying to empower local organizers and pro-life organizations.”

As the event wound down in Columbus, I announced to those gathered that we would return to the same spot next week. Many raised their hands, pledging to return along with us.

Watching reports flood in from across the country afterward was truly inspirational. Everywhere it was the same story: an influx of newly activated individuals coming to the street for the first time to take their first step of activism. This is, as John Piper reflected, a new wave of activists ready to defend innocent babies.