Note: Each of the nationwide organizers of the #Protest PP effort has written a summary of the national protest effort and their personal experiences on August 22. Below is the account from Eric Scheidler of the Pro-Life Action League. You can also read the accounts from Mark Harrington of Created Equal and Monica Miller of Citizens for a Pro-Life Society.

I was out on the streets of downtown Chicago with the Pro-Life Action League’s Face the Truth Tour on July 14 when the first video was released by the Center for Medical Progress (CMP). Pro-life activists posing as representatives of a biomedical firm had caught Planned Parenthood’s senior medical director, Deborah Nucatola, coldly scheming to profit from the sale of aborted babies’ body parts—all while munching on a salad and sipping red wine.

The timing proved providential. As this video went viral, my crew and I began to hear comments about it from pedestrians passing by our Truth Tour display. They were making the connection between Planned Parenthood’s illicit trafficking in fetal tissue and the tragically broken bodies of abortion victims depicted on our signs. It became clear that pro-life activists would have a special role to play in responding to the horrors revealed by that video and the other CMP videos were released soon thereafter.

In the days following, I reached out to two of my closest allies in the pro-life movement—Monica Miller of Citizens for a Pro-Life Society and Mark Harrington of Created Equal—to consider how we could use public protest to increase the impact of the CMP videos. We soon hit upon the idea of organizing a National Day of Protest at Planned Parenthood centers across the country.

Monica, Mark and I knew that pro-lifers were itching to do something in response to the videos. Sharing the video links on Facebook and complaining about scant mainstream media coverage of the scandal was just not enough. People were burning to take action—including many who had never gotten actively involved before.

We also knew that a series of simultaneous protests all across the country could break through the media silence on Planned Parenthood’s crimes. Past experience with the huge Stand Up for Religious Freedom rallies in 2012 and the National Day of Remembrance for Aborted Children in 2013 and 2014 proved that local media will often cover this kind of event when the big national outlets refuse to do so. All those local stories add up to major media outreach throughout the country.

We set a date of August 22, hoping we’d be able to organize at least 100 protests at Planned Parenthood centers nationwide. The League committed to sending out large banners declaring, “Planned Parenthood sells baby parts,” to the first 25 local leaders who asked for one. We quickly upped that to 40, and then 60, as applications to hold a protest poured into the special website set up for the event, ProtestPP.com.

In the end, the “ProtestPP” effort succeeded far beyond our wildest expectations. On August 22, 354 separate protests were held in every American state but Wyoming, as well as the United Kingdom, Ireland, Mexico, Honduras and the Netherlands. More than 78,000 people came out to denounce Planned Parenthood’s exploitation of unborn children and demand an end to their huge taxpayer subsidy, amounting to over $500 million annually—half their budget. More than 60 state and national pro-life organizations signed on as co-sponsors, leveraging all their social media resources to publicize the event and recruit local leaders. The story was broadcast and published through hundreds of TV, radio and newspaper outlets—including Time, the Washington Post, Fox News Channel and USA Today. It was especially gratifying to see all those “Planned Parenthood sells baby parts” banners provided by the League featured in so many of these stories.

Social media were also on fire with reports from the hundreds of protests taking place all over the country, with #ProtestPP the top trending hashtag on Facebook and Twitter. Tens of millions of Americans were reached through news and social media with the truth about Planned Parenthood.

The largest protest by far was held in St. Paul, Minnesota, where Pro-Life Action Ministries have built up one of the most committed citywide pro-life networks in the country; over 4,000 people came out to Planned Parenthood’s mega-center there. Other top protests included Charlotte, North Carolina, with 1,200; Cincinnati, Ohio, and Tempe, Arizona, each tallying 1,100 pro-lifers; and Orange, California, with 1,000. However, the significance of a local protest cannot be measured only in raw numbers. Local leader Barbara Renner was overjoyed at the 36 pro-lifers who turned out for the protest she organized in Patchogue, New York—most of whom hadn’t even known there was a Planned Parenthood center in their town! All of them committed to joining the pro-life ministry there, which will have a major impact in the months and years to come.

We were blessed by the presence of Catholic bishops at several protests: Bishop Earl Boyea in Lansing, Michigan; Bishop James Conley in Lincoln, Nebraska; Bishop Terry Lavalley in Plattsburgh, New York; Bishop David Ricken in Appleton, Wisconsin; and Archbishop Samuel Aquila, who arrived unexpectedly at the Denver, Colorado, protest and offered some words. At the Planned Parenthood abortion center in St. Louis, Missouri, the sight of 700 faithful pro-lifers turning out in the pouring rain for the protest convinced one young mother to cancel her abortion appointment, and another was escorted to a pregnancy center for help. Leaders in Los Angeles, California, and Falls Church, Virginia, also reported babies being saved from abortion thanks to the dramatic protests taking place.

In San Luis Obispo, California, a young woman accompanied by her aunt stopped to talk to sidewalk counselors, but then went into Planned Parenthood anyway for her abortion. As the protest there got underway, a pro-lifer blew a shofar horn, like those used by the armies of Joshua in the story of Jericho. Suddenly the young woman came running out of the clinic, telling her aunt she couldn’t go through with the abortion after hearing that horn.

In Arizona, Planned Parenthood shut down all their clinics, which likely resulted in some mothers deciding not to reschedule their abortions. They instructed employees and volunteers to counter-protest the pro-lifers rallying in Phoenix, and about 100 turned up—compared to 1,600 pro-lifers. In the weeks before the national protest, the radical pro-abortion group Refuse and Resist began calling on supporters to counter-protest in a handful of cities. Monica, Mark and I recognized this as a sign that our plans were right on target, and we made sure all our local leaders were ready to deal with any trouble-makers. On August 22, counter-protestors were reported at just over 40 ProtestPP sites, and at some locations Planned Parenthood supporters held banners reading, “Health care happens here.” In Detroit, Michigan, a group of Satanists performed a bizarre ritual involving “priests” laughing hysterically while pouring gallons of milk over women kneeling on the sidewalk in long white gowns. The group repeated the ritual at the protest in Ferndale, Michigan, later that morning.

There were no counter-protestors at Planned Parenthood’s mega-center in Aurora, Illinois, where the Pro-Life Action League hosted a huge regional protest, drawing a crowd of 1,600 from all over northeastern Illinois. Picket lines stretched a full block on both sides of New York Street! Every handheld sign in the League arsenal was put to use, as well as many large signs showing both abortion victims and beautiful unborn babies alive in the womb.

It was my honor to serve as emcee for the Aurora protest, rallying the crowd with headcounts from all over the country as local leaders texted them to me. After picketing for an hour, we gathered for a brief rally with speakers Pastor Jeff Moore from First Presbyterian Church of Aurora, pro-life blogger Jill Stanek, and Archdiocese of Chicago Respect Life Director Dawn Fitzpatrick. After the speeches, the crowd embarked on a “Jericho March” around Planned Parenthood’s block, and then returned to their cars at Our Lady of Mercy parish via a special shuttle we arranged to ensure adequate parking.

After the protest I talked to a reporter from WGN-TV Channel 9 in Chicago, who had arrived late, missing the huge crowd. But she took up my offer to send her photos, which she used in her fairly balanced report on the evening news, along with my comment, “How many pap smears does Planned Parenthood have to do to make it okay to fish through a tray of aborted baby parts looking for which ones will make you the most profit?”

The August 22 National Day of Protest succeeded far beyond our wildest dreams—the largest series of simultaneous pro-life protests ever held. News coverage was outstanding, the encouragement felt by participants was infectious, and the boost it is already providing to the ongoing pro-life outreach in communities from coast to coast will be felt for years to come.

Together with my co-directors Monica Miller and Mark Harrington, I will soon be announcing plans for a followup protest this fall, along with other initiatives to continue exposing the truth about Planned Parenthood and pressure our leaders to cut off their funding and hold them accountable for all their crimes. It is a great honor for the Pro-Life Action League to offer this kind of national leadership at such an historic moment for the pro-life movement.

Check Out Some More photos from the Aurora Protest 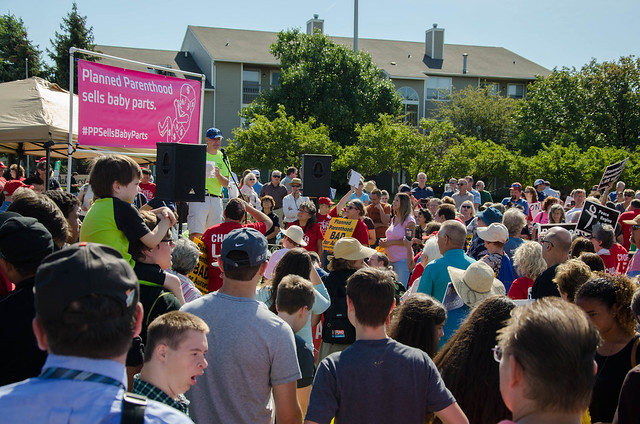